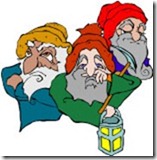 I wrote about interview puzzle questions recently to set the context for this article.

A few years back, a colleague asked me to ponder a Wizards and Dwarves puzzle as a potential interview question.  A typical statement goes something like this:

A village of wizards is nearby a village of dwarves.  Once a year, the wizards visit the dwarves, and line up the dwarves in increasing order of height, so that each dwarf can only see the dwarves smaller than himself.

The wizards have white and black hats.  They place a white or black hat on the head of each dwarf (using a strategy of their choosing, perhaps even randomly).  Then starting at the back of the line (the tallest dwarf), they ask each what color hat he is wearing.

Each dwarf who answers incorrectly is killed by the wizards.  The other dwarves can hear his answer, but do not know whether he was killed.

What strategy minimizes the number of dwarves killed?

Ok, I thought about it.

Among many irritations I have for puzzle questions, the fiction is frequently distracting:

Why villages?  Why wizards and dwarves?  Why in order of height?  What if they are all of the same height?  How can you kill a dwarf and not have his neighbor nearby hear it?

And my brain spins with other tangents:

Dwarves have high magic resistance and constitution – don’t they get a saving throw?  Toss in a few +5 battle axes and there would be a wizard slaughter!

In the spirit of the barometer question, I formulated the following responses:

If you follow the intended script, you can find solutions in which no more than one dwarf is killed (the tallest has no knowledge of his hat color and his odds are essentially subject to chance).

But as shown above, one can simplify and further optimize the solution by exploiting ambiguities in the fiction.

And it’s a lot more entertaining.

This entry was posted in Humor, Interviewing. Bookmark the permalink.

3 Responses to Wizards and Dwarves