Who Cheesed My Penguin? 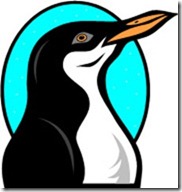 Some years back, I was seated at a departmental all hands meeting.  My colleagues and I were viewing a series of fairly mundane presentation slides, when up came something new and surprising.

Without additional context, the slide read something like this:

If we can get all our penguins, birds and chicks in alignment, we’ll be able to move forward smoothly.

It was a classic WTF moment; confused glances were exchanged around the room. 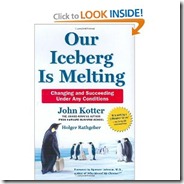 Turns out the senior leaders had recently held an offsite where they became acquainted with the work of John Kotter, including the book Our Iceberg Is Melting.  Kotter is regarded as an authority on leadership and change.

I no longer recall what exactly they were hoping to change, but do recall being intrigued – what about this book was (apparently) so inspiring?

I vowed to give it a thorough read, and did.  I also took time to acquire and read the (somewhat related) book Who Moved My Cheese?

Neither impressed me very much.

In the bird book, an observant and forward-thinking penguin concludes that his community’s home iceberg is melting.  Initially ridiculed, avian opinion eventually sways in favor of relocating the colony, as the penguin overcomes skeptics and enlists the support of key allies. 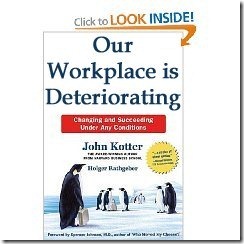 The rodent book deals with residents living in a maze, reliant on a steady supply of cheese.  One day the cheese disappears, and they deal with the consequences, with varying degrees of denial and proactive behavior.

While the penguin book does offer a few strategies for leverage (recruit respected experts, build support from key leaders), I didn’t find either book particularly compelling. 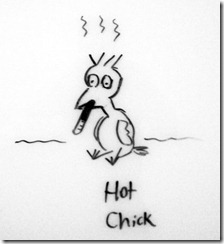 I shouldn’t downplay the overall usefulness of the literature, however.

These books were uplifting in an indirect way, as they provided nearly endless material for satirical Photoshop modifications and whiteboard drawings (see book cover above right, and the picture to the right).

So it would be a lie to imply that I did not find these books inspiring, though not for the reasons intended.

What’s the bottom line?  I found these books unhelpful or objectionable primarily for these reasons

Both books employ a fable format, which I found patronizing.  You are not a human being pondering reasonable real life trade-offs; instead you are a bird or (worse) a rodent.

At least one review on Amazon compares the penguin book favorably to Animal Farm, which to me is puzzling.  In Animal Farm the animals are delightfully symbolic and ironic.  I’m unaware of penguin characteristics that lend themselves well to climate analysis or adaptability (excepting swimming and extreme tolerance to cold).  I will grant that rodents are symbolically opportunistic, though not in a particularly positive way.

In the end, I don’t feel the fable format lends value.  Rather the animals provide an unnecessary layer of abstraction from what might otherwise be a compellingly pragmatic story.

To complete the fable, the stories need a moral lesson.

As such, the outcomes are predetermined: the animals successfully adapt to change.  There is no room for ambiguity; to succeed, you must change.  Those who change, win.

What if instead one of the rodents ran ragged through the maze, failing to find cheese, eventually collapsing in despair and starvation in a dark, forgotten corner?  What if the cheese supply returned in its original location, better than ever before (the supplier had been on a brief trip to Europe, collecting artisanal cheeses)?

Perhaps the penguins’ dilemma is rooted more deeply than a single iceberg.  Global warming may doom their new home to the same fate, slightly delayed.  Just maybe, their selected strategy was misguided and even worse than staying put.

These possibilities are not part of the story.  In these books, change must happen, somehow.

In reality, it’s the nuanced consequences, and their associated risk, which makes implementing change challenging.

For example, employees who gave up on Apple in 2004 to join the promising start-up that went belly up may well have believed at the time they were successfully implementing change management in their financial opportunities.

The message of these books is clear: you must change, or you will die.

Not only are the outcomes in these stories predetermined, but the consequences are as large as they can get – life or death.  Move or freeze.  Search or starve.

This of course is a ploy to raise the stakes to the greatest possible levels, inhibiting the possibility for contrary considerations.

You’d have to be crazy to avoid changing, if you risk death as a result.  Everyone should get on board with that, right?

In reality, the change you’re likely looking to implement involves something less exciting like convincing a team to convert from C++ to Java.  Or you’re trying figure out whether to join the hot startup or let your remaining 25% of stock continue to vest.  No easy life-or-death scenarios here.

One can even imagine the manager thinking …

“I want my team to change, but they’re pushing back.  I’ll have them read this book, then they’ll realize they must change.  Or else they’ll die.  Maybe I’ll even kill them myself … “

If you need to effect change, don’t hand out books – go make it happen!

Impress on your colleagues that change is needed, and why.  Propose an improvement and explain why it’s better.  Get folks to agree to it, and follow up to make sure it happens.

If you’re looking to change the semantics of an optional field in JIRA, then an 8-step change process is almost certainly overkill.  But those guidelines are fairly sound and intuitive overall.

But you don’t need to read a silly animal book to understand them.

This entry was posted in Books, Leadership, Management. Bookmark the permalink.